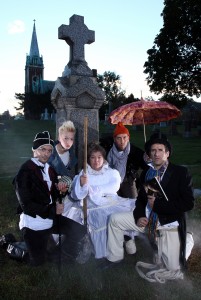 Last week I got a call to take some promotional photos for a theatre troupe for their new show opening:  “We want photos of us in clown costumes, in a cemetery, at dawn, holding shovels and books, and can you get some fog in the photos somehow?”

So there we were, the cast of 500 Clown Frankenstein (and on Facebook) and I, shivering in the early morning sunlight in a cemetery on the north side.  We found an absolutely gorgeous small church with a 100+ year old churchyard we got permission to shoot in at dawn, and the setting couldn’t have been more perfect.  And yes, I’m not a guerrilla warfare photographer- If I’m shooting somewhere other than my studio I get permission first.  There’s nothing out there than can ruin a photo more than getting arrested for taking it.  Call me crazy, but that’s my opinion. 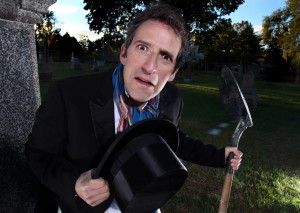 We started a little later than we hoped so the sun was a little brighter than we envisioned, but the photos still turned out great.  And yes, we even managed to get some fog in the shot, thanks to an amazing invention: fog in a can.  If they can put cheese in a can, they can put fog in a can, right?  Right.  For only $15 per can, you can own your very own fog, released at your command.

After our fingers and toes were sufficiently numb and we got the shots we wanted, we called it a day.  Making sure to clean up everything we brought into the cemetery, of course, and to conduct ourselves respectfully in the presence of a graveyard.  It was already a pretty macabre way to spend a morning- standing in a cemetery with shovels in the month of Halloween.  It was fun… creepy… but fun.

I also got a great shot before we got started of the sun just barely coming up from behind the church, and the moon still visible in the sky.  NOW I’m ready for Halloween. 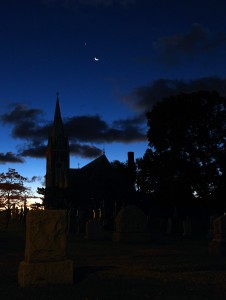