This Friday is my birthday, and if you’ve been following Organic Headshots for a few years you’ll notice that the only time I offer any serious discount on headshot sessions is this time of year.  And I say everybody should eat cake, not just me. So whether you want to update a headshot I took for you back when your hair looked like it used to, or if you want to politely pass this to that friend or colleague who is still using that cropped photo of their wedding portraits as a headshot as a hint… discounts for all!

From today until February 18th, 2013 only:
25% off all headshot sessions
Just mention the super secret password: CUPCAKE

And yes, I spent a little time today taking these photos of a cupcake on fire.  (Don’t try this at home.)  Actually, I first tried to light the actual cupcake on fire first by covering it with some lamp oil, until I realized that lamp oil needs a wick to burn.   So I drizzled some lamp oil on some marshmallows on top of the cupcake and lit them on fire.  They charred nicely and looked neat, but it didn’t really scream “birthday” to me.

So I just jammed a handful of birthday candles on top of the cupcake and took photos of them slowly burning down to nothing. I shouldn’t say slowly- they melted down to the frosting within about 2 minutes.  And at the last second the flames suddenly shot up much higher into the air. (Did I mention don’t try this at home?)  Yes, I was using the cupcake covered in lamp oil.  I swear, I have a degree in higher education- I just sometimes don’t act like it.  Luckily I blew out the candles before any real danger… keeping my finger on the shutter to still get some cool shots of the smoke- because true photographers live on the edge like that.

But I’m no adrenaline junkie.  I kept a wet towel on hand and a bucket of water.  (2 points for using my brain and getting my safety badge in Girl Scouts.)

Oh, and the cupcake was rendered inedible and had to be thrown away.  But there are a dozen more in my fridge so everything’s okay. 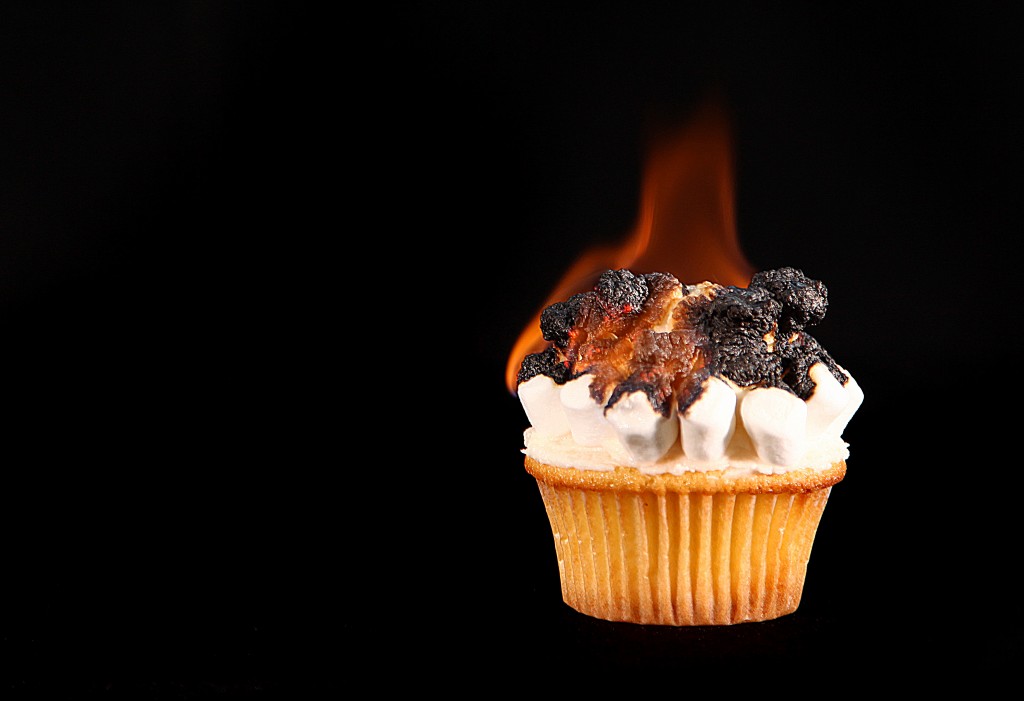