Let’s play with some old cameras

« A headshot on your resumé? 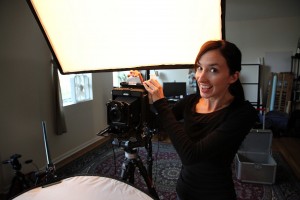 Today my neighbor Randy Moe and I played with a 90 year old old camera.  Why?  Why the hell not?!  Okay, actually there is a reason.

Randy and I live and work in the Bloomingdale Arts Building- a building with live/work studio lofts that allow artists to combine their living space with their work space so they can afford to create their art and run their arts-based businesses.  This is where Organic Headshots calls home.  Next month is Chicago Artists Month, and as part of the celebration of this city’s fine independent artists our building is opening up a handful of studios to exhibit and host 20+ artists’ works, on October 13th from 6pm-10pm.  I will be opening the Organic Headshots studio as part of the evening of art, not to look at art in my space, but to create it.  I’ll have a background and lights set up to take portraits of attendees with my usual new-fangled digital camera. 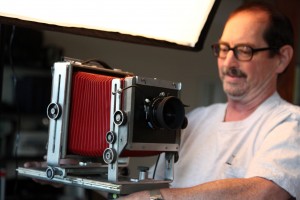 But here’s where it gets more interesting… More interesting than on the fly studio portraits at an open house art show inside several artists’ studios?  Is that even possible?  YES.  Because Randy is joining me and providing a 90 year old camera to also take portraits.  And not just an awesome-looking 90 year old camera with tilt-shift bellows and even the little black fabric thing you’ve got to cloak your head with to focus on someone… it will be shooting on 5×7 direct positive film.  What on earth is that?

First let’s start by explaining traditional film photography.  You take a photo on a negative, which is a clear film with a “negative” reversed image on it.  You project light through it onto photo paper to get the image to transfer as a positive to the paper.  Direct positive film skips that step and exposes the image it takes right onto a 5×7 piece of photo paper.  Which means it only makes that one print, and that’s it.  Truly a one of a kind piece of art. 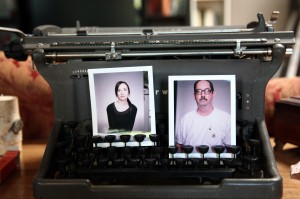 So today we did a few tests with that camera.  We started by using another camera with a similar lens and a Polaroid back so we can duplicate the settings and see what it would hopefully look like if it synced up with my high-tech studio strobe lighting and exposes properly.  We ran a few tests with the Polaroid film and then exposed 2 plates with the 90 year old camera (which I have just named “Grandpa” so I don’t have to type “90 year old camera” again).  It was loads of fun taking the photos, and Randy will develop them sometime this week to see how they came out.  The suspense is killing me!  It’s even more intense than waiting for season 3 of The Walking Dead.

But in spite of all that, we really didn’t need a reason to play with a 90 year old camera.  When you have something that cool, no reason is necessary.  Stay tuned for an update on Grandpa’s prints and if Grandpa will be functioning for the open house on October 13th!

Step one for awesome headshots: CHILL OUT. »