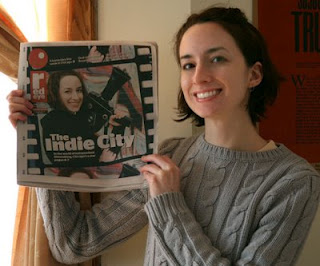 Today, I woke up to several phone calls, emails, and text messages from friends laughing at me. Yes, they were laughing. My photo was on the cover of the Redeye- the entertainment publication of the Chicago Tribune, which is free and known for being picked up by commuters to learn about what Britney is doing and to pass the time on the train with some soduko or a crossword puzzle.

I learned today, that if you see someone you know on the cover of a newspaper, you laugh at them. Don’t get me wrong- they weren’t making fun of me- when you see something you didn’t expect while on your daily commute, you can’t help but grab your belly and laugh. Of course, they congratulated me and I thanked them… though I didn’t feel like I did anything difficult. A reporter emailed me a few weeks ago, asked me some questions, sent a staff photographer over, snapped some photos in the freezing cold without my coat on, and that was it. Not hard work at all. Except for the freezing cold photo session, I guess.

I know this is a blog about photography, so I should let everyone know (if you don’t pic 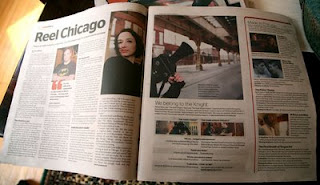 k up the Redeye) that I’m also an independent filmmaker. I’ve been making independent short and feature films for some time, and have co-founded a production company called Brown Finch Films, where we’re working on several feature-length documentaries.

Primarily I work as the cinematographer, which makes sense if I’m also a photographer. Some people ask me if there’s a big difference in filming movies compared to taking still photos. My short answer is, “yes. When you shoot someone with a movie camera, you can hear them fart. You can’t with a still camera.”

But I think my 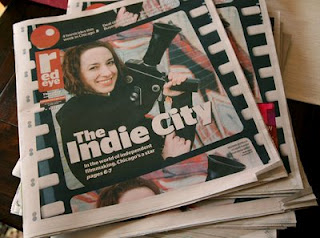 old cinematography professor from college summed it up best when he said, “Michelle, movies is just moving pictures. Photos in motion, but photos are photos. If the photos in the movie look like shit, the movie is shit too.” I plan on cutting out the article and mailing it to him where he now lives in Bulgaria. He might be the only other person to recognize the camera I’m holding in the cover photo… Which is a 16mm Soviet made Krasnogorsk-3, for all you other nerds like me.