« Having your photo taken: not as bad as going to the dentist…

Yesterday I had the pleasure of interviewing local filmmaker Coquie Hughes for an upcoming article in my column with CU-Blogfidential on independent filmmaking in Chicago. Coquie is a truly inspirational filmmaker because she’s the ultimate independent, home-grown, grassroots artist. She’s an African American lesbian mother who had a confrontation with a friend of hers who one day told her that now that she’s a mother, she needs to stop being a lesbian. 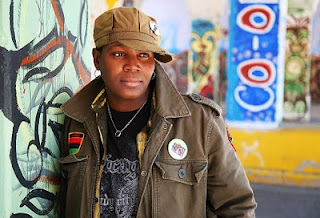 Angered by the audacity of this woman, she decided to make a documentary film about the social issues of being an African American lesbian mother, and started interviewing children and mothers in the community to explore their opinions and share their stories.

For these filmmaker interviews I like to take photos of my subjects, so Coquie and I went outside for an impromptu photo shoot. I got to take advantage of the murals on the wall across from my building- which I’ve been looking forward to shooting since I moved in a month ago. After spending 30 seconds with the spunky fresh Ms. Hughes, I knew we HAD to take her photo in this underpass.

You have the right to own photos of you »