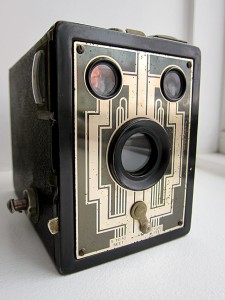 Today is a snow day!  It’s been snowing all day.  I’ve been editing photos and catching up on work.  And avoiding shoveling.  So I thought today might be a good day to take a look at an old camera my dad found lying around his house recently and unloaded on me.  I saw it on his desk and said, “what on earth is that old box camera thing?”  He said, “it’s the camera I had as a kid.”  I burst out laughing.

“Shut up,” he says, “it was a hand-me-down when I got it.  I’m not THAT old.”  But he has had the same haircut since Nixon was in office, so the jury’s still out.

Allow me to introduce you to my new camera.  I will name him “Mr. Black.”  As you may recall, I took “Mr. Brown” on a little excursion last spring- a Kodak Brownie Bulls-eye camera I found for $2 at a thrift shop.  That model was manufactured between 1954 and 1960 and eats 120 film rolled onto a 620 spool. 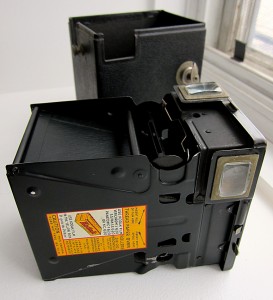 Mr. Black is a Kodak Brownie Six-20 US model camera, manufactured between 1933 and 1941.  Making it only marginally older than my AARP-card-carrying father who’s had the same haircut since Nixon.  After I post this I know I’m going to get a phone call where my dad will very calmly remind me that he changed his hair once, for 2 weeks, in the mid 1980’s.

Anyway… today I cleaned Mr. Black’s lenses as best I could and took a look at his inner workings.  This camera model was still relatively new in the home camera industry, so the features are really minimal.  The shutter speed and f/stop are fixed at somewhere around 1/30 and f-26.  I think.  There’s no way to focus it since it’s focused to infinity… unless you push the tiny lever on the front of the camera to the side, which changes the settings from its default 10 feet – infinity, to 5 – 10 feet.  It just moves the diway lens out of the way to reveal the bare shutter.  Oooo, technology.  (note sarcasm) 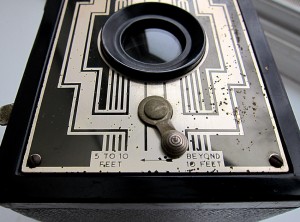 When home cameras first started with the Kodak #1 (yes, that’s what it was called) in 1888, the camera was essentially a little black box with one little lens on the front and no viewfinder.  You took photos with it, then mailed the whole box back to Kodak, who unloaded the film, developed it, loaded it again and sent it back to you to take more photos. The photos were called “snapshots” after a hunting term meaning to shoot without aiming.  Because these cameras didn’t have viewfinders, you were essentially taking photos without really aiming the camera- just pointing it and crossing your fingers. 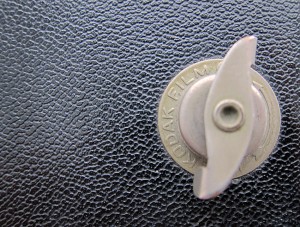 Mr. Black was a new model home use camera that you could load with film yourself.  It has 2 viewfinders- one on the top and one on the side- for vertical and horizontal viewing.  But if you look through them you don’t see much… Actually, they’re designed for waist-level viewing so you do see what you’re aiming the camera at if you hold the camera at your waist and squint one of your eyes shut until you look like Popeye.  If you push your eyeball right up against the viewfinder you see absolutely nothing.

I’ve got film for Mr. Black and am ready to take some questionable-viewfinder snapshots, and he hasn’t taken any photos in probably about 50 years or so, so he’s ready to get back in business.  Now I just have to wait for it to stop snowing so I can take it outside without drenching it…

Oh, and for those of you who have been thinking throughout this post, “holy crap!  That camera is 70-something years old, it must be worth a fortune!”  You’re wrong.  Brownies of all models are prolific and mostly just used by people as decoration on shelves and conversation pieces.  You can find your own Mr. Black for like $20 on Ebay.