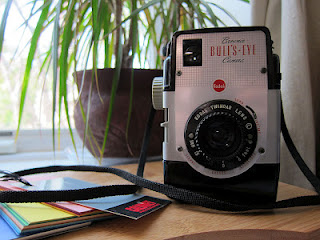 I decided that as the weather warms up in (cold, blustery, wet, and windy) Chicago I should get out of the studio and take some fun snapshots around the town.  But after spending most of my days with a 21.1 megapixel two and a half pound digital SLR strapped around my neck this year, I kind of wanted to leave my usual camera behind this time.

Just like any good photographer… okay, let me rephrase that… Just like any unnecessarily nerdy photographer, I had about 8 or so vintage film cameras in my collection to choose from.  Should I take the 1960’s Nikon with pop-top, waist-level viewing?  Or what about the 1981 Chinon?  A lesser-known brand of its era but with some of the best optics and metering out there. 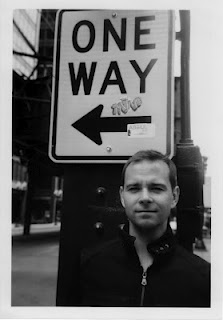 Then I remembered “Mr. Brown.”  Several years ago (okay, probably 7) a friend and I were doing some thrifting in a resale shop when I found “Mr. Brown” on a shelf wedged between some books and broken radios.  “Mr. Brown,” as I call it, is a Kodak Brownie Bulls-eye camera, manufactured between 1954 and 1960.  I bought it for $2 and haven’t gotten around to testing it out.  Until last weekend.

Jamming some film in “Mr. Brown” and testing it out remained on my to-do list for 7 years because it doesn’t eat normal 35mm film, or even normal medium-format 120 film for that matter.  Medium format 120 film is the proper size for the Brownie Bulls-eye, but it’s spooled on size 120 spools, and these cameras take 620 spools.  Which are no longer manufactured. 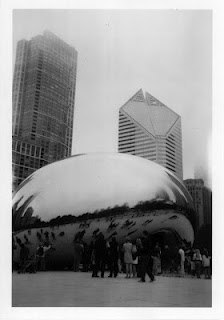 So where does someone go to find the proper food to feed a 52 year old camera?  A 113 year old camera shop.  I figured if anyone knew how to get a hold of 120 film on a 620 spool it would be Central Camera– the oldest camera shop in Chicago.  I’ve been going there for years, but since I packed up my darkroom (temporarily- some day, somehow, I will get it back…) I haven’t stepped through their doors in quite a while.

So last weekend “Mr. Brown” was fed his proper film food and took some of its first photos in probably decades.  Here are two of them- processed and printed by Central Camera (which is awesome).  I had them request that the lab return the extra 620 spool so I can experiment with my next adventure: re-spooling 120 film on the 620 spool myself so I can feed “Mr. Brown” regularly and do this again.