Photos on a 75 year old camera

« A client you should know 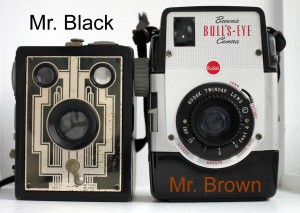 As you may recall, earlier this month I planned to load a 75-ish year old camera with film and take it out for a spin.  I have two vintage Kodak Brownie cameras to play with (a small, but growing collection) and decided to run a roll of black and white film through “Mr. Black,” a Kodak Brownie Six-20 manufactured between 1933 and 1941; and a color roll of film I re-spooled myself (moment of pride) through “Mr. Brown,” a Kodak Brownie Bulls-Eye manufactured between 1954 and 1960.  “Mr. Brown” I scored for $2 at a thrift shop.

However, “Mr. Black” is a little more special than a cheap thrift store find… “Mr. Black” was my father’s camera when he was a wee lad growing up in Brooklyn.  I should mention (because my dad will be upset if I didn’t) that although the camera was manufactured between 1933 and 1941, my dad was not.  The camera was a hand-me-down and at least 10 or so years older than my dad.

But the greatest part of having this old camera in the family for so long means that we can compare photos taken on the camera about 50 or so years apart.  Behold!  Here is a photo of my father taken on “Mr. Black” at Prospect Park in Brooklyn, NY somewhere in the neighborhood of 55 to 60 years ago:

Please note: he is wearing a pair of high-top Keds, NOT Converse Chuck Taylors.  He says only the cool kids wore Keds and believes it is super important to make this distinction.  However, he grew up to be a mechanical engineer and reads Consumer Reports on a weekly basis.  With this data, I believe high-top Keds might have been the dorky shoes of the era.  I’m just saying.

And now for my next trick, I present to you, two photos taken on “Mr. Black” earlier this month… THE VERY SAME CAMERA:

And of course, to let “Mr. Brown” have some fun too, here’s a photo he took this month.  Note the better framing… it’s easier to frame a photo better when the camera has a viewfinder.  I’m glad Kodak got the memo somewhere between 1941 and 1954 and started putting viewfinders on their cameras…

My next mission is to recreate the photo of my dad in his high-top Keds with the same camera, half a century after the first photo was taken.  It’s going to take a little persuasion to get him into a pair of white shorts though… But I’m persistent.  I will win.