About 6 years ago a friend and I took a random road trip to Tulsa, Oklahoma to hunt for ghost towns.  It sounds like a weird idea now and it was probably a weird idea then.  We had the notion that we would take hundreds of amazingly brilliant photos of Old West style storefronts, boarded up and with tumble weeds blowing past, and maybe even abandoned wagons and buggies or anything that looked like we might have stumbled on the set of “Dr. Quinn, Medicine Woman.”

Instead, we found something we weren’t expecting to find: people.  We met several people still living in what the rest of the country titled “ghost towns;” towns with no post office, any open businesses to speak of, barely any public works departments, street lights, police and fire departments or any of the other things that put a cluster of buildings on a map.  Most of these towns had been boom towns of some kind- they had struck oil or zinc or some other resource, became a quick town years ago, then the population either slowly or abruptly receded when the business left the town. 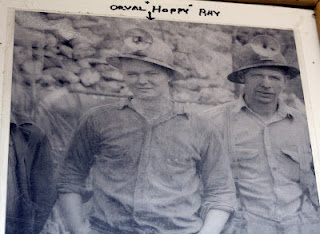 The town that fascinated us both the most was Picher, Oklahoma, just against the border to Kansas.  Picher became an instantaneous town in WWI when a zinc mine opened and hundreds of thousands of people lived and worked there.  After the war and zinc was no longer needed in such quantities, the town’s population dwindled; but shot up again during WWII when the mine bustled again.  And then again, the population numbers dropped.

In the center of what used to be the heart of the town we found a storefront that was still open.  It was a pool hall/music venue/museum operated by a man named Orval “Hoppy” Ray.  Hoppy lived in Picher his whole life.  His father was a miner during WWI and he was a miner during WWII.  In one corner of the store amps and microphones were set up: every Monday some of the old timers got together and played country bluegrass music.  Hoppy complained that some old lady always came to sing and was so lousy she should probably stay home. 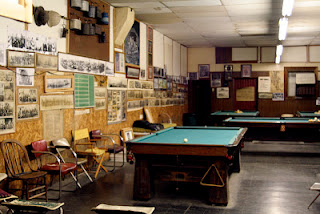 The rest of the store had several pool tables set up and some glass cases with mining tools, pieces of rock and ore, and tons of old photographs.  Hoppy had tacked photos all over the walls and had boxes and albums filled with photos that went back to about the time photography was invented, including large panoramas of group photos of town council members, schools, miners, and more.  He told us stories of the mine until the sun started to set, and a handful of locals came in to play pool while we talked, then joined us in looking through photos when Hoppy started to unroll long, sepia-toned panoramic shots of the first time the town was actually called a “city.”

Here’s where the story gets sad… Hoppy had terrible things to say about the Army Corps of Engineers.  He said that the mine under the town was unstable.  Huge sinkholes opened up regularly, chemicals and excess minerals had been leeching into the water supply for decades, causing illness.  The town was supposed to be an Army Corps Superfund site: where the federal government funds a massive cleanup and develops a plan to get the area back to tip-top shape.  But Hoppy claimed they were misusing the money and not making a difference.

Around the time we were there most of the residents had left but people like Hoppy who lived there since birth and wanted to see the town shine again were hanging in there as long as they could.  The town became divided: there were those who took the buy-out money the government offered to purchase their land and help them relocate so they can bulldoze the town, and those who wanted to stay put.  Apparently we had just missed an independent film crew who came through to make a movie about it.  It’s called The Creek Runs Red, and they got Hoppy to narrate it.  I saw it on PBS about a year later.

I only bring these photos from Picher out of the vault to look at them now because my traveling buddy, Josh, just sent me a link to this New York Times article today, which talks about Picher’s sister city, Treece, Kansas; and how both Treece and Picher were eventually bought out to be closed up forever.