Here it is… the first photo to be printed in the new darkroom. Drumroll, please… ta da! 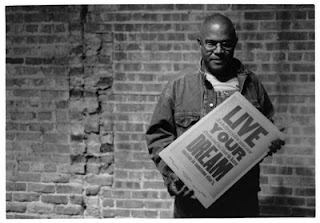 When I moved into my new apartment nearly a year ago I asked the landlady if I could put together a darkroom in the basement somewhere and she agreed. But I haven’t gotten around to doing it until recently. I finally unpacked the ‘ol enlarger, pans, cans, and other goodies and set it all up. There are still some light leaks in the walls, but I’m feeling lazy so I’ll probably just slap some duct tape on the holes.

I’d include a photo of the new darkroom, but it’s ugly and small and not very noteworthy. It’s a small space, but I don’t need much room since I’m a small person, so I’ll just refer to it as “cozy.” It’s actually a half-finished or half-torn down (however you look at it) bathroom in an unfinished basement. It has a low ceiling, crumbling drywall, and someone put a random water heater in it. It doesn’t sound too appealing, but it’s nice. It also has a sink to wash prints in, which is great, and a working toilet which is kind of useful actually, since I lose a lot of time in the darkroom and it will be nice to not have to go upstairs to the bathroom after every bottle of water. And maybe when I make more prints in there and give them to people I can chuckle a little to myself… “I peed in the same room I made that photo in. Tee hee.”

I forgot how relaxing, yet exhilarating making prints in a darkroom can be. While printing this photo I felt strangely calm and focused, yet every so often found myself breaking loose and busting a move, dancing to my iPod. Well… busting a small move since I don’t have too much room and don’t want to knock anything over. I’m going to name the new darkroom “The Batcave.” Just because I want to be able to say, “if anyone needs me, I’ll be in the batcave.”