Photographer takes hideous photos of herself… so every other photo of her will look awesome.

« Volunteering for some volunteers

During the last 9 years working as a headshot photographer I estimate that about 95% of the people I’ve taken a headshot of have made some kind of self-deprecating comment during the photo session.

“I’ll try not to break your camera.”
“I’ve got a huge nose- just warning you.”
“Try not to get my 18 chins in the photo.”
“Well it’s a good enough photo for what you’ve got to work with.”

I spend about 5% of a headshot session going over clothing options, 5% adjusting lighting, 20% posing and coaching, and 10% actually snapping the shutter button.  And then 60% telling people they’re not as ugly as they say they are.

But I get it.  I completely understand.  Because I hate photos of myself too.  Sometimes I look at a photo of me and think I look like a stunt zombie wearing earrings.  And it wasn’t until about year 6 as a headshot photographer that I finally gathered the courage to get in front of the lens and book another photographer to take my own professional headshot.

I love being behind a camera, looking through the lens, and capturing fractions of a second of our short time on earth and sharing that with the world.  I love images, imagery, telling stories through photos, and using a camera to paint the perfect portrait of amazing human beings who deserve dignified images of themselves that say, “look people!  I’m here!  And this is how awesome I am.”

But if you ever point a camera at me, I will punch you in the neck.

Whenever I look at a photo of myself my eyes instantly and uncontrollably dart to the areas of my face I find the most offensive- my dark under eye circles, the one eye that always manages to look bigger than the other, a forehead that takes up half my face, a nose right off of one of those Easter Island statues, smile lines that look like they’re drawn in with a Sharpie…  You get the point.  But why? Why does my attention go to the part of my face I’m most self-conscious of?

I think part of it is learned behavior, especially with so many of the people around us putting themselves down.  When we’re paid a compliment­­– women especially– we feel as if we’re supposed to over-humble it until we literally degrade ourselves.  How many times have you said to someone, “that’s a nice dress” only to get a, “oh, this old thing, it’s from last season, I bought it on sale…” Or “Your hair looks nice,” is so often met with, “no, it’s awful- it’s so frizzy, I can never get it to do what I want it to do…”

This is actually the decidedly unhealthy thinking that I believe makes me a better photographer.  I understand people’s pain.  With 95% of clients pointing out their alleged shortcomings in photos, it helps that I’ve been there.  But after 9 years of being there, I’m starting to wonder how we all got there.  And how we can get out.

I recently called up Megg, a make-up artist I work with, and had her bring over her kit for a little internal social experiment.  We put the camera on a tripod and took some photos of me.  Then I told her all of the things I see when I look at those photos- the undereye circles, the smile lines, pale lips, one squinty eye, yadda yadda.  The types of negative things I hear my clients pick apart when they see photos of themselves.  She used her make-up to draw more attention to those things- darkening the area under my eyes, drawing in smile lines, reverse-contouring my forehead so it looks bigger…

Then we took a photo.  This is that hideous photo: 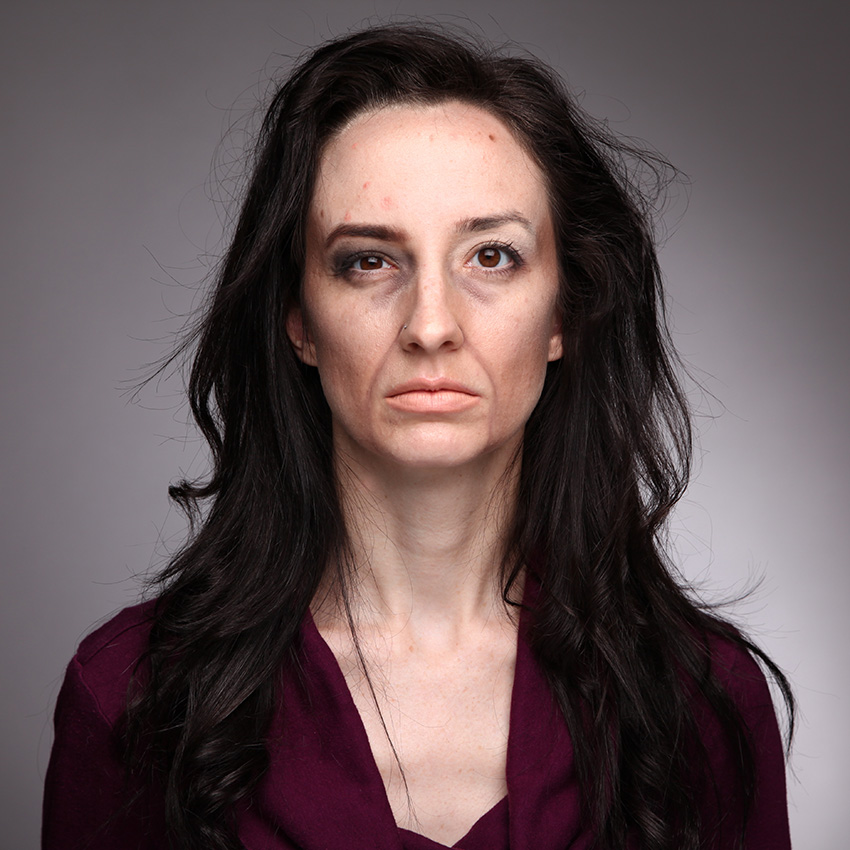 There they were.  All of those things I complain about when I see photos of myself.  All of those alleged imperfections that I can’t stop staring at and point out to other people even when they call me crazy and say “oh you look fine, shut up.”  They were all painted on my face like monster make-up.

Going into the experiment I was expecting to feel validated in a way- like other people would finally see how hideous I look in photos and stop telling me I look fine.  I also thought it would feel good to get all my insecurities out into the open and render them powerless over me, and in a way it did.  Megg and I actually laughed hysterically when we looked through the photos- they looked so much unlike me that they were comical.

But in reality, it made me feel like crap.  I never really considered the pretty obvious outcome: that I would see a photo of myself looking like crap, so I would feel like crap.  I mean I REALLY felt like crap.  But here’s the interesting part… it was a familiar feeling.  It was like the slightly crappy feeling I get when I see a not-so-flattering photo of myself, but multiplied exponentially until it felt like an actual stabbing pain in my side and I physically winced while looking at the picture.

We took a photo of Megg wearing some “monster make-up” as well: accentuating her so-called crooked smile, extra wide mouth and laugh lines, yadda yadda…  And we both laughed at our ridiculous photos, partly to hide how much like crap doing this made us feel, but partly because it was actually pretty funny. 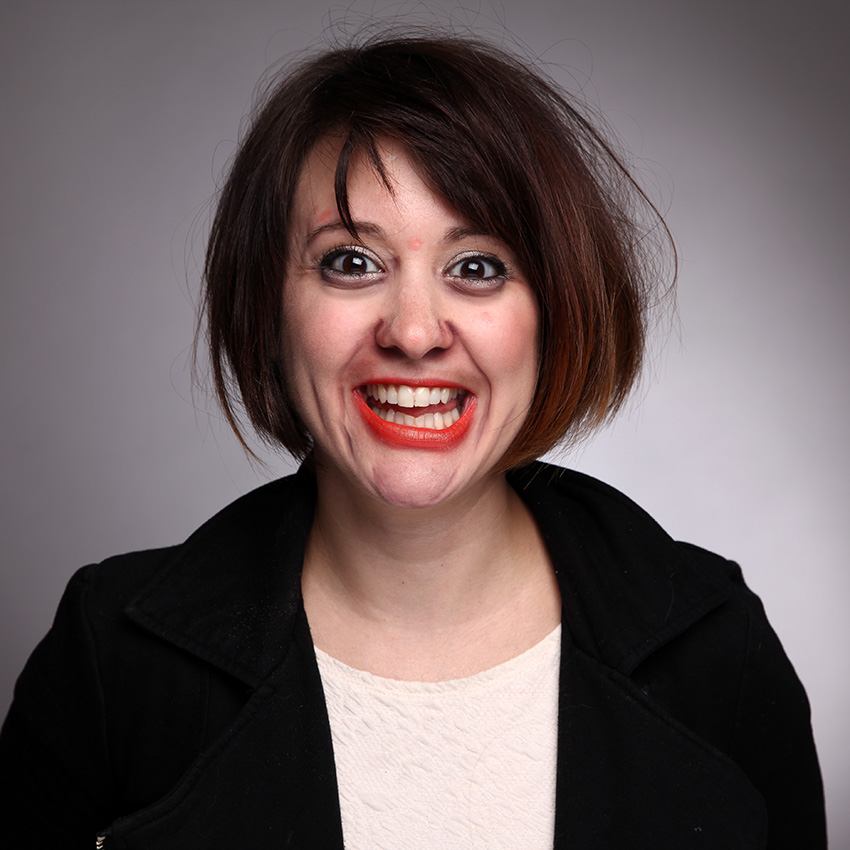 Here are the photos we took of ourselves before the “monster make-up.” 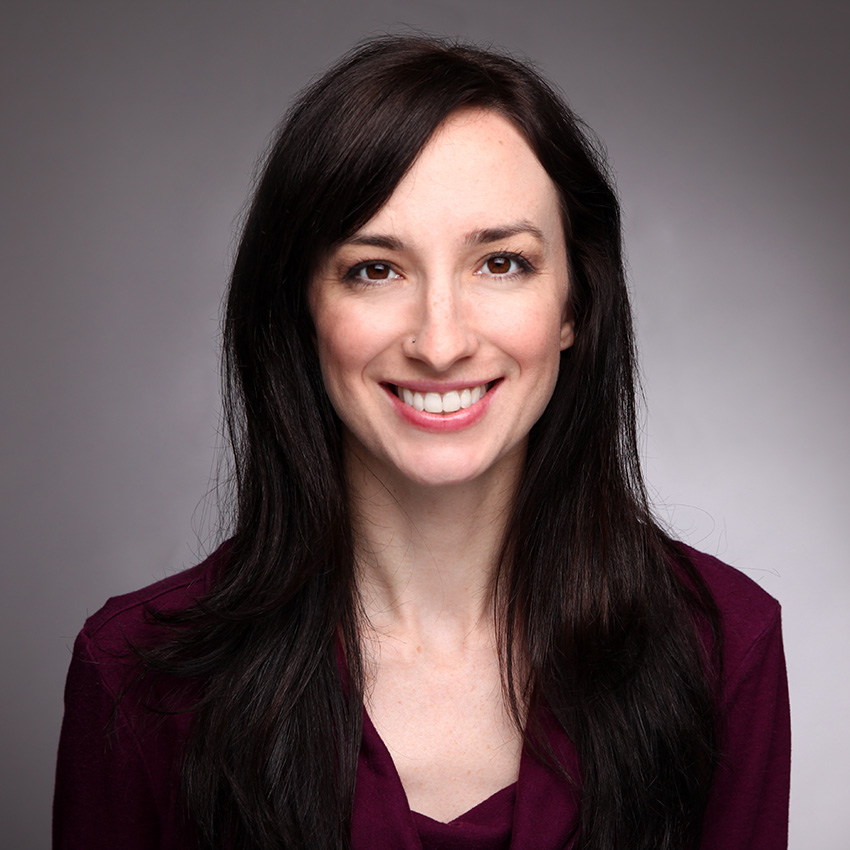 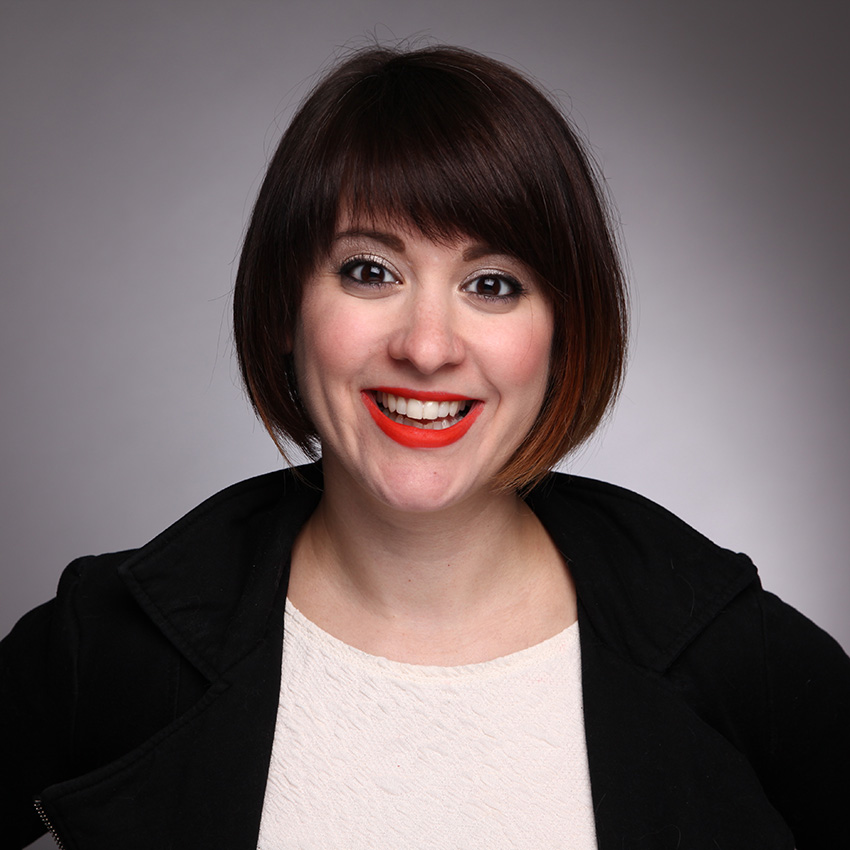 It was like we both suddenly understood the joke for the 95% of the population who hate photos of themselves.  The punch line is that we’re not as hideous as we think we are.  What we see in our photos is not what others see. 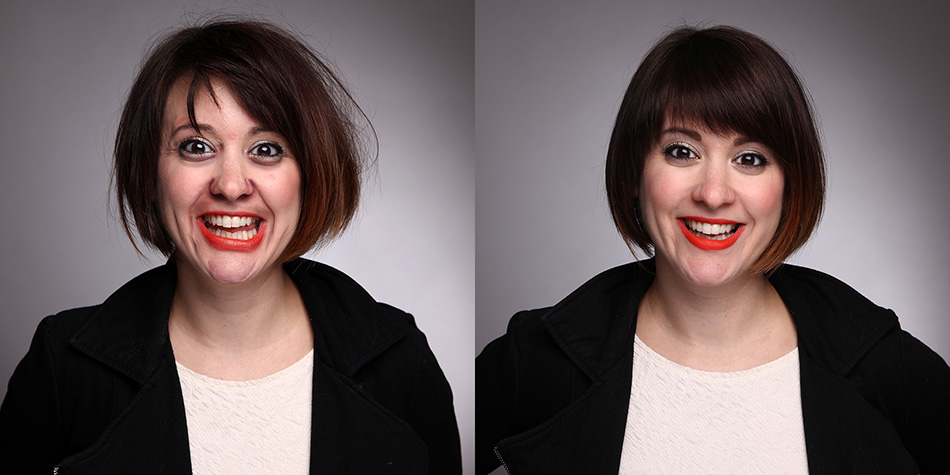 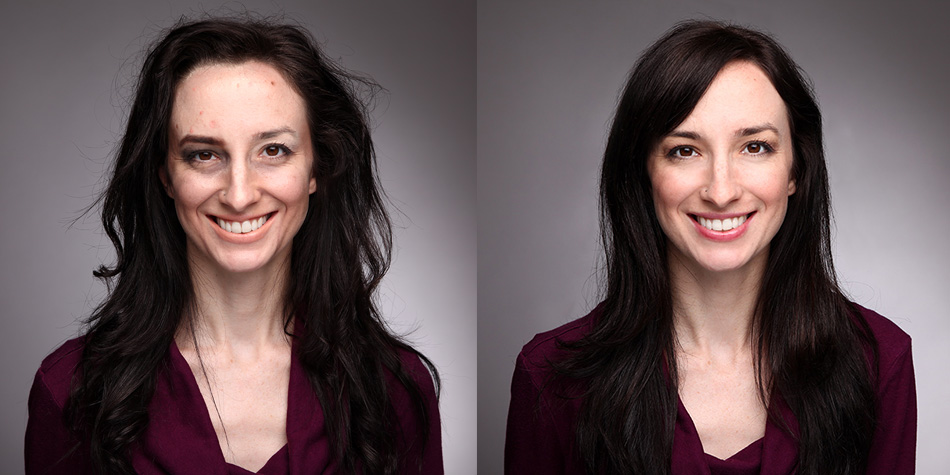 As a photographer, I spend so much time trying to tell people that either their faults don’t exist and they’re making them up, or that no one else sees them as quickly and easily as they see them on themselves.  I see my own imperfections, so I understand.  And after seeing such hideous photos of myself, the normal photos of me looked so awesome that I actually smiled when I saw how nice I looked.  I can’t remember the last time I looked at a photo of myself and liked it so much that I smiled.

Other people don’t notice the faults we have a tendency to focus on with our features (that eye that looks smaller, the crooked nose, the wrinkles, etc.); they literally don’t see them- they filter through that to see/read you and your personality or mood.  And when they see a photo of you, it’s the same thing- if your expression is friendly and confident, THAT’S what they notice, and not your stray hairs and weird teeth.

“Yeah, that makes sense for pretty people or even normal people,” you’re thinking, “BUT I’M HIDEOUS AND MY EYE REALLY IS SMALLER THAN THE OTHER.”  Yes, your eye just might actually be smaller than the other.  But it’s usually not the first thing people will notice.  (Trust me- I’ve seen thousands of people point out something like a squinty eye that I literally didn’t see, even when I was looking for it.)  And it doesn’t by any means make you hideous.

Faces are not perfectly symmetrical.  Faces change and vary over time and even depending on how much sleep we’ve gotten or how much water we’ve been drinking.  We’ve mostly all got eyes, ears, a nose, and a mouth and eyebrows and nostrils and cheeks and all that, but we have no control over the proportions or how they turn out.  So stop apologizing for your features.  There’s nothing to apologize for.